Trip to South Korea and Japan: On Expedition for the Next Roadshow of Forum Digital Technologies

From the 4th to the 7th February 2020, a delegation headed by the German Federal Ministry for Economic Affairs and Energy (BMWi) travelled to Seoul and Tokyo for inter-governmental talks. To prepare for the next roadshow of Forum Digital Technologies (FDT), one representative of FDT was able to join the delegation in South Korea and Japan and could hence gain exciting impressions and establish important contacts. 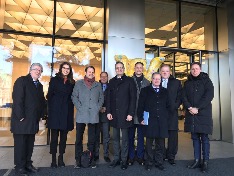 Whilst the last roadshow of Forum Digital Technologies in September 2019 was organized to the Canadian east coast, South Korea and Japan will be the focus coutries of FDT's non-European activities in 2020. In the first week of February 2020, a representative of FDT participated in a delegation trip of the Federal Ministry for Economic Affairs and Energy to Seoul and Tokyo gaining many exciting impressions of the two Asian countries in advance of the next roadshow.

The trip commenced on the 4th of February in South Korea’s capital Seoul, which welcomed the delegation with bright sunshine and double-digit sub-zero temperatures. South Korea, whose export industry accounts for around 40% of its gross domestic product (GDP), is an important trading partner for Germany. In particular, the large entrepreneurial conglomerates, so-called “chaebols”, such as Samsung, Hyundai or LG, are important international players. At the same time, the South Korean economy is heavily dependent on them, as reflected in the fact that Samsung's revenue alone accounts for almost 14% of South Korea's GDP. The sector of small and medium enterprises (SME) is weaker, an issue for which the Ministry for SMEs and startups, founded in July 2017, tries to find solutions.

South Korea is internationally known for its technology-enthusiastic population and very efficient infrastructure. This can also be observed in the rollout of 5G: In April 2019, the three South Korean telecommunications companies SK Telecom, Korea Telekom and LG U+ launched the world's first commercial 5G mobile network. The government has supported this development since the beginning of 2015 through its 5G Strategy Promotion Committee and has announced to invest around 25 billion Euro in funding by 2022. During a visit at SK Telekom offices, the delegation was presented with various 5G application scenarios: In addition to the classic industrial application fields in the areas of autonomous driving and Industry 4.0, the games industry is particularly relevant for private use. Thus, a high-resolution and fast virtual reality could soon be available on smartphones.

Another important topic for South Korea is artificial intelligence (AI). This has been particularly so since the South Korean Go champion Lee Sedol lost to Google's AlphaGo AI-software in March 2016. Two days later, the government announced investments in AI research amounting to an equivalent of 779 million Euro. In December of the same year it published a master plan for an intelligent information society and in May 2018 a comprehensive 5-year plan for research and development in the field of AI. With these strategies, South Korea aims at becoming one of the four most important AI countries in the world by 2022 and promotes projects particularly in the fields of defense, health and internal security.

Strong partnerships have already been established between Germany and South Korea in the past – amongst others – in competence areas of the BMWi. For one through bilateral calls for proposals by the Central Innovation Programme for SMEs (ZIM). Moreover, two application-oriented projects funded by the BMWi are closely linked with South Korean partners. In the GeniusTex project, for example, RWTH Aachen University is developing a platform for the production of smart textiles and closely cooperates with the Korean Institute of Industrial Technology (KITECH). In the context of the OPTIMOS 2.0 project, the Bundesdruckerei, as consortium leader, cooperates with Samsung Electronics on the development of an open, practical ecosystem of secure identities for mobile services. Whilst during this delegation trip it was time-wise impossible to visit the Samsung Electronics headquarters, the so called Samsung Digital City located 20 kilometers outside of Seoul with its 35,000 employees in over 130 buildings as well as the Samsung Innovation Museum is definitely worth a visit at the roadshow.

On the 5th of February, the journey was continued two flight hours further to the east. In Tokyo, great impressions were already gained at the breakfast on the first morning, which was organized by the German Chamber of Commerce and Industry in Japan. Representatives of start-ups and corporations offered their insights into Japanese business life. The representative of the consulting agency Anchorstar, which supports companies to enter the Japanese market, said that in Japan particularly start-ups face great challenges. Similar to South Korea, large companies shape the economy and society in Japan. Employees often work for the same company for their entire life and the work culture is known for long working days and countless hours of overtime. At the same time, since labor productivity is lower than in any other G7 country, a new law has limited the number of overtime hours to 100. Despite its very distinct working culture, the country with its 120 million inhabitants generates the third largest GDP worldwide and due to its consumer-friendly population, Japan is less dependent on exports than many of its neighboring countries.

At the same time, the society is undergoing major transformations, which the government attempts to shape through its Society 5.0 strategy. Technologies such as Big Data and AI are seen as central solutions to tackle the social problems of the world's fastest aging population. How the company Fujitsu imagines the high-tech society of the future was shown to the delegation in the company's showroom called netCommunity. All-conntecting technologies should help to create a safe and friendly society in which all people can lead a healthy and sustainable life.

On Friday morning, the 4th German-Japanese Digital Dialogue was opened by Vice Minister of the Ministry of Internal Affairs and Communications (MIC) Yamada Makiko and the Parliamentary State Secretary of the BMWi Christian Hirte. While political discussions were held in the morning on topics such as regulatory policy, 5G and AI, representatives of German and Japanese companies joined for the business dialogue in the afternoon. An important result of last years Digital Dialogue was a call for a bilateral research project. At this years Digital Dialogue the successful start of the AIRPoRT project was reported. The project, which was launched in October 2019, aims to improve wireless communication networks and AI in robotics and networked production. Whilst the German consortium is led by the German Research Center for Artificial Intelligence (DFKI), the Japanese consortium is led by the National Institute of Information and Communications Technology (NICT).

Another important research organization in Japan is the National Institute of Advanced Industrial Science and Technology (AIST) and its Artificial Intelligence Research Center (AIRC). At the visit of the research centers facilities at the port district of Tokyo, the delegation could link their discussions to the previous roadshow of the predecessor project Smart Data Forum in May 2017, during which a joint conference was successfully organized.

Many important contacts were made or re-established during the delegation‘s trip that will help in organizing the upcoming roadshow to Japan and South Korea. After being back from the trip it is now important to determine the most relevant topics for new bilateral research collaborations and to look for projects within the BMWi's technology programs which would benefit most from new contacts with partners in these two exciting Asian countries.