Assistive robotics in modern operating theatres, precision medicine for surgery, the use of machine learning and augmented reality for tumour detection: there are many exciting fields for the application for big data and artificial intelligence (AI) in healthcare. For this reason, the UK Science and Innovation Network (SIN) at the British Embassy in Berlin organised an expert workshop together with the Forum Digital Technologies. 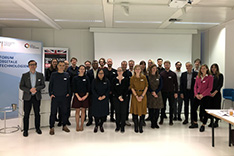 On 3rd December 2019, participants from six universities and seven research institutes from the United Kingdom (UK) and Germany came together in the showroom of Forum Digital Technologies for an all-day workshop moderated by Dr. Anne Schwerk from the German Research Center for Artificial Intelligence (DFKI). The expert forum was greatly enriched by the presence of researchers from the Universities of Leeds, Cardiff, Edinburgh and Oxford as well as two fellows from the Alan Turing Institute

Nick Schneider from the German Federal Ministry of Health (BMG) started the workshop with presenting the AI strategy of the Federal Government as well as relevant initiatives in the health sector. The ministry's focus is "on the last mile" and particularly promotes the practical use of patient-centred AI solutions in healthcare as the transfer of research results into standard care is often inadequately addressed. Afterwards, two researchers from the Fraunhofer Heinrich Hertz Institute, Jean-Claude Rosenthal and Eric Wisotzky presented their projects on augmented and mixed reality in the operating theatre. Their research could in the future be used for supporting surgeons to clearly identify different tissue properties in order to recognize tumor cells more accurately. The research of Dr. Ramamoorthy from the University of Edinburgh deals with intelligent and partly autonomous robots in the operating theatre. His vision is a democratisation of the operating theatre, in which clinics also outside of major urban centres could offer specialised interventions using robots.

The third part of the workshop focused on data-driven medicine and its challenges. Nisha Shah from Oxford University illustrated the patient-centred approach to British health research with a variety of British research projects. Diogo Telmo Neves from DFKI contradicted the common opinion that the quantity of data was decisive for machine learning as good research is only possible with high quality data. In the same context of "more is not always better", Dr. Stefan Konigorski from the Hasso Plattner Institute in Potsdam presented insights into new possibilities for conducting clinical studies on the basis of so-called N-of-1 precision studies, whereby personalised medicine can be facilitated. The relevance of the precision studies also became clear in the subsequent discussion, since many visions of the use of AI are not yet evidence-based, and precision studies could be important for creative evidence on their usage.

In the afternoon of the expert forum, participants discussed challenges, potentials and solutions for the future of AI in surgery. It became clear that although there is very exciting research in this field, many projects are still a long way from their everyday use. During the lively exchange between the participating experts from both countries, it became clear that medical robots should support the surgeon; fully autonomous robots, however, are viewed critically. It was agreed that, especially in the field of data-driven health research, the exchange between experts from research and clinics on a national level as well as between competence centres on an international level is crucial. The interest of researchers from both countries in jointly advancing the field became clear through constructive discussions during the expert forum. The workshop was a good start for the strengthening of exchange and cooperation, on which the British Embassy and Forum Digital Technologies will build on with future events.